Examples of devices we use that makes use of an electric motor include:

Electric motors generate mechanical energy (force) through the interaction of its windings and its magnetic field.

What are the Components of an Electric Motor?

An electric motor contains a number of components embedded in it. These components are responsible for its converting ability, namely: 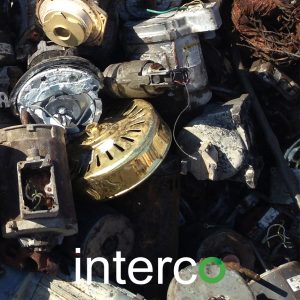 These mentioned components all make it possible for the electric motor to successfully convert electrical energy into mechanical energy.

Why Recycling Electric Motor is Important

What happens when your fan stops working? Maybe it got spoiled by an electric surge that damaged all its components – the electric motor inclusive. Do you dispose of it?

Recyclers buy these damaged fans, pumps, blowers, etc. as scraps and take them to recycling centers for recycling. In addition, they separate the recyclable parts and set them apart for processing. Also, the electric motor is 100% recyclable since a majority of its components are metallic.

Copper is very valuable, expensive and used in many electrical devices. Rather than continuously depleting its source, why not recycle? However, recycling motors open job opportunities for interested parties. If you ever dream of being a recycler, you learn more from Interco.

How to Scrap Electric Motors for Recycling

The process of recycling electric motors should be direct and straightforward:

If you cannot do this on your own, you can sell your damaged devices that use electric motors as scraps to professional recyclers and make money.

Electric motors are very common items to recycle. Virtually every electric item with a mechanical movement in a home utilizes an electric motor. Many contain either an AC (alternating current) or DC (direct current) electric motor. Look for common motors that are recyclable in household items, industrial applications and automobiles. Interco recycles them all. 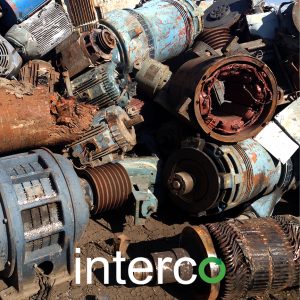 Most motors contain valuable copper and aluminum components. However, the exterior of most motors comprised of steel with a strong shell which protects the more fragile wiring and parts within. Additionally, some motors contain aluminum instead of copper. Most noteworthy. like copper, aluminum conducts of electricity and works well in some applications.

The more copper the more valuable an electric motor is to a recycler. Second most valuable common nonferrous metal found in electric motors is Aluminum. Consequently, steel can be recycled, but steel does not share the value of copper or aluminum. Because the presence of wood and plastic on electric motors is considered a contaminate, those motors contain lower value.

Interco recycles millions of pounds of  motors each year. As a result, recyclers categorize motors in to three main categories of size:

If your company has a scrapyard full of electric motors, sell them to Interco so they can be properly recycled. Contact Interco here.