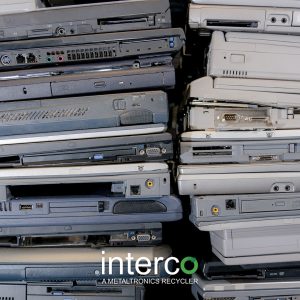 What Can I Sell as eScrap?

There is an abundance of electronic scrap as Americans discard an average of 130,000 personal computers every day. As a result, used electronics is one of the quickest growing sources of waste worldwide. Furthermore, electronic waste, eWaste, or eScrap, describes discarded electronic devices. So, companies may be wondering, “who recycle scrap eScrap near me?”

In fact, for every 1 million cell phones that are recycled, 35,274 pounds of copper, 772 pounds of silver, 75 pounds of gold, and 33 pounds of palladium can be recovered. 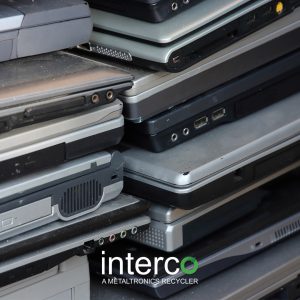 The fast cash recyclers can earn from a pile of scrap leads to users researching “best company to recycle scrap eScrap” or “who recycles scrap eScrap near me?”

Similarly, a company that meets that title must be certified and reputable.

Interco was the second company in the world to receive R2:2013 certification. Moreover, the R2 standard fosters responsible recycling. The company regularly audits our downstream vendors all the way to the end consumers, using the R2:2013 standard. Furthermore, this assures our suppliers of our commitment to the compliance and integrity of our downstream vendors.

eScrap recycling is the process of recovering material from old devices to use in new products. Scrap computers and electronics have various toxic and hazardous chemicals that release into the environment if not properly disposed of.

According to ISRI, only 25 percent of household electronics are collected and recycled, which leaves 3.5 million tons available for recycling.

In addition to a relatively short lifespan, the following electronics hastily become eScrap in today’s age of technology.

Computers: Whether a desktop computer or laptop, these electronics contain a lot of components that can be scrapped as a whole unit or separated. As a result, about 2,205 pounds of electric scrap from personal computers contains more gold than that recovered from 17 tons of gold ore.

Mobile Phones: New cell phones are regularly introduced to consumers, which over time has led to a substantial amount of “older” generation cell phones being thrown away. Most scrap yards will pay for whole unit mobile phones, but some may require battery removal.

Hard Drives: When hard drives reach the the end of their lifecycle or you just no longer need them, you can recycle your hard drives safely at Interco.

Motherboards: An e-waste recycling center will reliably break down the motherboard and safely dispose of the parts that contain toxic waste. You can sell motherboards by the pound.

Servers: Servers categorize as an environmental hazard due to the PCB boards that contain polychlorinated biphenyl. Interco is the best place to sell used servers and networking equipment.

Overall, recycling computers and eScrap is vital to keeping as much of these materials out of landfills as possible. Recycling scrap computers and electronics enable recyclers to recover various valuable metals and reduces the harmful effects on the environment that improper disposal causes. Additionally, Interco buys components, whole units, peripherals, batteries and boards, and precious metal anywhere in North America for recycling. Lastly, to learn more about the best company to recycle scrap eScrap, click here.